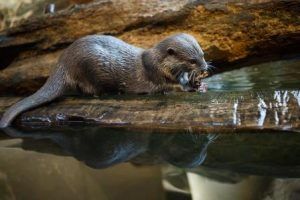 The Lakes Aquarium is involved in conservation projects on a local, national and even international basis.

Pearl Mussel Ark Project This year, we’re extremely excited to be continuing our dedicated conservation and research partnership with the Freshwater Biological Association (FBA) based locally at Ferry Landing, just 6 miles away from the Lakes Aquarium. For almost 90 years the FBA has been committed to understanding and conserving not just Windermere (one of the largest bodies of fresh water in the UK) but also freshwaters throughout the world.

Conservation Experts at the FBA are leading the way here in the UK with an active captive breeding project to save the Freshwater Pearl Mussel (margaritifera margaritifera); classified as critically endangered. In fact, only a handful of populations remain in England and Wales, with local Cumbrian rivers being home to most. Sadly, in most of our English rivers, young mussels are not surviving to adulthood, resulting in aging, relict populations, which are at high risk of extinction. Habitat degradation and loss has seen this species decline by over 90% in the last century. Without our help, the Freshwater Pearl Mussel faces the very real threat of extinction.

• Freshwater Pearl Mussels can grow much larger than marine mussels (as big as your hand!) and live until they’re around 130 years old.

• They play a vital role in our rivers as they can filter around 50 litres of water per day (that’s almost as much as an average 5 minute shower uses!), removing particles like algae and bacteria from the water column.

• The importance of these animals and the conservation work undertaken to protect them cannot be underestimated. If we can get the conditions right for the Freshwater Pearl Mussel to survive outside of captivity, through their filtration, they can improve the habitat and water quality for fish, invertebrates, birds and aquatic mammals. 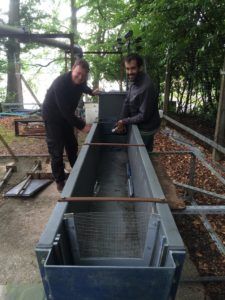 The Ark To help save this species from extinction the FBA, in collaboration with the Environment Agency and Natural England, in 2007 set up a Freshwater Pearl Mussel Ark, with the aim of breeding mussels in captivity until the rivers have been restored and the juveniles are old enough to be reintroduced.

Lifecycle Pearl mussels have a complex but fascinating lifecycle. As part of 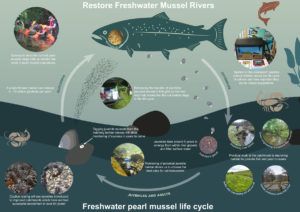 their lifecycle, the mussel larvae (known as glochidia) must attach to the gills of young Atlantic salmon (Salmo salar) or brown trout (Salmo trutta) where they can develop into juvenile mussels. For more detailed information please visit https://www.fba.org.uk/pearl-mussels Their lifecycle means that the FBA staff have a lot of work to do! And with the FBA being local, we’re delighted to have the opportunity to work together on various projects. 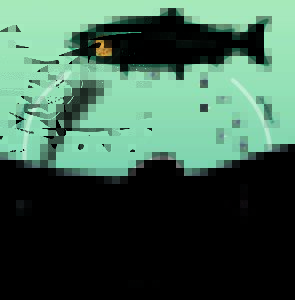 A New and Exciting Project Every summer, the FBA pearl mussel team spend hours of their week collecting juvenile mussels that have freshly dropped off (excysted) from the fish gills. When this happens it is called excystment. This year we are aiming to assist the FBA with their latest project, Accelerated Excystment. What is ‘Accelerated Excystment’? This simply means speeding up the rate at which juvenile mussels drop off the fish gills. As mussels are cold-blooded their lifecycle depends on temperature. Juvenile development on the gills of fish happens quicker in warmer water. This new project aims to speed up the collection of juveniles simply by increasing the water temperature the fish are kept in. This quicker growth should encourage the juveniles to drop off in greater numbers over a shorter period of time, making collection much more efficient. As an established aquarium, we can control the temperature of the water in our exhibits and can easily keep the fish at a constant 16 ⁰C. Staff from the FBA will visit on a daily basis to collect any juvenile mussels and take them back to their Ark, where they will take several years to grow large enough to be released into their native river.

A Strengthening Partnership In the past we have arranged for our experienced staff to work alongside the pearl mussel team at the FBA to help them with their work. They have been able to assist with the day to day tasks of running a captive breeding programme and with the construction of their flume, which mimics a riverine environment for older juveniles. Recently FBA placement students have worked with our staff to publicise our collaboration to improve the captive breeding of pearl mussels. 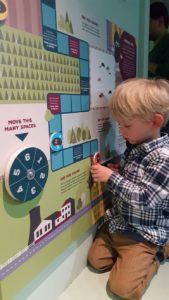 Pearl Mussel Exhibit As an Aquarium that displays many native Cumbrian species, it would have been excellent to have some live pearl mussels. However, as they are critically endangered, it isn’t possible. We do however have a fantastic educational exhibit dedicated to this fascinating species where visitors can learn about the complex lifecycle of these incredible mussels. This interactive exhibit includes a video detailing some of the ongoing mussel work the FBA are involved with, touch-and-feel items and even an interactive game which invites children to learn more about the habitat and threats on these endangered mussels. Colouring sheets are also available for budding artists! This exhibit was funded by Biffa Award as part of a recent project entitled “Restoring Freshwater Mussel Rivers in England”.

We invite you to come along, explore and find out more.

Support and Further Information The FBA is a registered charity, you can help to support the Freshwater Pearl Mussel Conservation Project by making a donation or get more involved by becoming a Member of the FBA. Help freshwater environments to thrive. To find out more visit: fba.org.uk

Captive breeding project to increase the population of the native white clawed crayfish. Also used to raise awareness of the crayfish and how to reduce the risk of spreading the crayfish plague.

Observation of pike behaviour (swimming and breathing) to see whether this behaviour influences olfaction by encouraging circulation of water through their nasal chambers.

Dr Jonathan Cox spent some time on site observing the pike for a research paper on olfaction.

What we do
Mission Statement

To provide an educational, entertaining and enjoyable experience, that appeals to all ages and delivers value for money in a safe environment.

The Lakes Aquarium is part of the Real Live Leisure Company Ltd, and has a key part to play in assisting RLL achieve its own mission:

To develop and operate creative leisure destinations, with consideration to stakeholder expectations and environmental values.

We aim to constantly enhance our reputation as a quality, respected and credible leading Leisure Destination by developing:

A helpful, knowledgeable and professional workforce will help provide the above.

The culture of the Lakes Aquarium is a professional, friendly, supportive and compassionate organisation where all stakeholders’ opinions are listened to, respected and encouraged.

The health of our aquarium family, which includes our visitors, staff and animals, is our top priority. In light of the most recent advice from Public Health England and the government, we will be temporarily closing the Lakes Aquarium effective immediately, until further notice.

We apologise for any disappointment and inconvenience caused.

Please be assured that our dedicated keeper team will continue to provide the best care for our animals during the closure.

If you’ve booked tickets for any day during this closure, you can exchange them for any other date in 2020 or we can provide a refund. Please send your booking details to info@lakesaquarium.co.uk

We’ll keep you informed through our website and social media channels. Thank you for your patience and we really look forward to welcoming you back to the Lakes Aquarium when we re-open. Stay safe everyone.